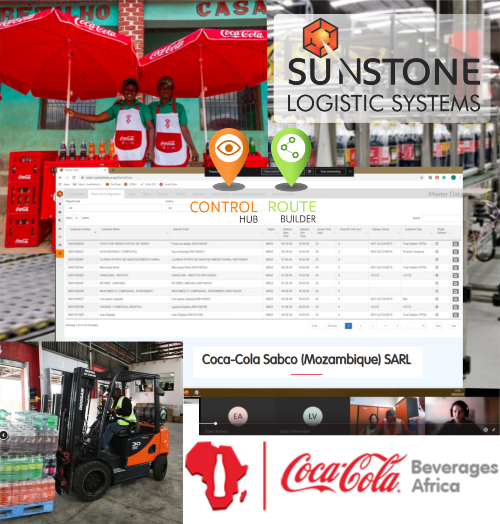 At the end of January 2020 Sunstone was given the go-ahead for the implementation of a route optimisation and execution management system (Route Builder and Control Hub) across all Mozambique depots, CCBA requested that it be rolled out in the first quarter of the year

On 23 March, President of South Africa, Cyril Ramaphosa announced a national lockdown with  immediate travel restrictions due to  the COVID-19 pandemic.

The travel ban meant that an in-country implementation would be impossible and Sunstone & CCBA needed to put their thinking caps on.  Could this implementation be done remotely?

Both teams main concern was the language barrier (English/Portuguese) and the fact that all meetings and training would need to be done virtually.  Taking the lead from the courageous CCBA leader Garth Cameron, it was decided that both teams would take on the challenge!  More time would be spent in parallel planning sessions where Sunstone consultants would remotely connect onto the route planners computer and engage with them over Teams or Zoom.

After two weeks of training both teams were surprised how seamlessly the collaboration was working, the planners in country were feeling confident using the Control Hub & Route Builder software and an official Go-Live date was set for 24 April 2020.  In less than a month Sunstone & Coca-Cola’s collaboration achieved the first remote software Go-Live in Coca-Cola’s Mozambique’s history. Not only did the CCBA team adapt to the new system very quickly they also beat the pervious system planning and optimisation metrics.  Planning on average 3 fewer vehicles per day and increasing load efficiency and space utilisation by up to 24%.  Some of the benefits of conducting a successful remote implementation:

This very unexpected way of doing things may shape the course of how both Sunstone and CCBA look at software implementations in the future, achieving cost and time savings for both teams